The traditional picture of leaving the workforce entirely and entering retirement at age 65 is no longer a reality for many older people in the United States, according to a new study conducted by The Associated Press-NORC Center for Public Affairs Research.

A majority of Americans age 50 and older plan to work past the age of 65 or have already stayed in the workforce past this age. A quarter of those who haven’t yet retired say they never will. And many of these older workers continue to pursue new opportunities in the later stages of their careers, with 4 in 10 planning to switch career fields in the future and more than a quarter recently completing job training or additional education.

Anxieties about financial preparedness carry considerable weight among those wrestling with decisions about continuing to work in their later years—financial needs are cited as highly important in decisions about when to retire, more so than any other factor. 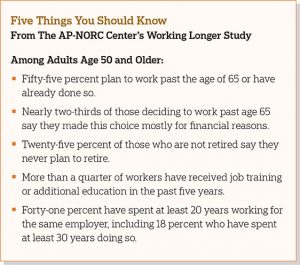 In 2013, The AP-NORC Center conducted a major study with funding from The Alfred P. Sloan Foundation, investigating issues related to work and retirement facing older Americans. The 2013 study provided insight into the shifting notion of retirement, which is not only moving to later in life for many but also no longer represents a complete departure from the workforce. It examined a variety of implications of the trend of working longer, along with the motivations for doing so, both financial and otherwise.

This study extends that research and examines new topics, including older workers’ efforts to improve their career skills and their plans to adjust the parameters of work in the later stages of their working life. The survey also tracks a number of attitudes and behaviors that were examined in 2013 surrounding issues facing older workers. The AP-NORC Center, with funding from The Alfred P. Sloan Foundation, conducted 1,075 interviews with a nationally representative sample of Americans age 50 and older.

Working Longer: The Disappearing Divide between Work Life and Retirement