The notion of retirement in the United States has shifted in recent years. Americans are working later in life, and retirement no longer represents a complete departure from the workforce. To explore these issues, The AP-NORC Center for Public Affairs Research has undertaken a series of major studies on older Americans’ experiences in the late phases of their careers, their preparations for retirement, and the realities of retired life in the United States.

The 2017 study offers new insights on the experiences of Americans age 50 and older with respect to unemployment, saving enough for retirement, and needing to withdraw money from retirement accounts prior to retiring. These new findings suggest that 1 in 5 older Americans have grappled with a recent period of unemployment, and for many, other financial obligations are prioritized over saving for retirement. Nearly 8 in 10 Americans age 50 and older who are currently working and not yet retired say they have not saved enough for retirement in the past 10 years.

The survey results reveal a modern form of retirement that doesn’t happen all at once but instead comes in phases. While most Americans in this age group can easily be classified as either working or retired, 1 in 10 fall somewhere in the middle, reporting that they have retired but are either still working or looking for work. Among the 37 percent of older Americans who are still working and not yet officially retired, nearly 9 in 10 say it is at least somewhat likely that they will do work for pay during their retirement. The findings suggest that work behaviors and retirement attitudes shift depending on where one is situated on the spectrum of retirement; those who are still working are anxious about retirement, while retirees express excitement, and those who are working during retirement may work part-time to take on fewer hours than those who have yet to retire.

This study updates the 2016 reports on work and retirement planning and finds that most trends remain stable; age is not slowing older workers down, and one-third have furthered their education. Most Americans are at least somewhat financially prepared to retire, with many relying on Social Security income as their main source of income during retirement.

The AP-NORC Center, with funding from the Alfred P. Sloan Foundation, conducted 1,683 interviews with a nationally representative sample of Americans age 50 and older. Findings from the survey offer a glimpse into the work life and retirement plans of adults age 50 and older in the United States. 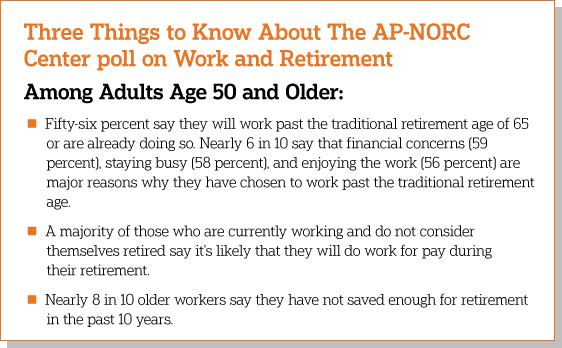