While many older Americans look forward to their retirement years with great anticipation, a substantial subset of the aging population is struggling to prepare for retirement and is deeply concerned about the financial realities of this later stage of life, according to a new study conducted by The Associated Press-NORC Center for Public Affairs Research.

A majority of Americans have multiple retirement income sources, but 53 percent say they feel more anxious than secure about the amount of savings they have for retirement. Only two-thirds of those who are still working are currently saving for retirement, and many are juggling competing financial obligations that make saving a challenge. Many older Americans plan to rely heavily on Social Security to fund their retirements and also plan to take these benefits early, even though doing so may reduce the total amount they receive. 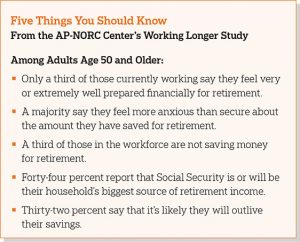 To get a comprehensive picture of the work and retirement issues facing older Americans, The AP-NORC Center has conducted two major studies with funding from The Alfred P. Sloan Foundation. The first study, conducted in 2013, explored the modern concept of retirement, which is shifting to later in life for many and also no longer involves a complete departure from the workforce. This study also investigated anxieties about retirement planning and the factors older Americans consider when making decisions about the transition to retirement.

This new study, conducted in 2016, extends this work and focuses on both working longer and retirement issues. The findings presented in this report focus on attitudes and planning behaviors about retirement. The survey also reveals a number of inequalities in older Americans’ retirement planning, with significant divides between lower- and upper-income Americans. Income levels and feelings of anxiety are also related to the type and number of income sources individuals have or expect to rely on during retirement. The AP-NORC Center, with funding from The Alfred P. Sloan Foundation, conducted 1,075 interviews with a nationally representative sample of Americans age 50 and older.

Retirement Planning in America: Anxiety, Inequality, and the Role of Social Security

Many opt to take Social Security before full retirement age